“Sometimes the best thing you can do is not think, not wonder, not imagine, not obsess. Just breathe and have faith that everything will work out for the best.”

It has been a couple of months since I last wrote.  Life has been somewhat hectic.  Dad has been in and out of hospital and at one point, we didn’t think he was coming home.  Our world, once again, shattered as we watched dad deteriorate, was impossible to bear.  Unable to mobilise, hallucinating and scared, we sat with him every hour.  Margaret, a family friend, asked the hospital Chaplain to visit, my heart sank but I was simultaneously overwhelmed at the same time.  We prayed together and I was grateful for her thoughtfulness.  There were discussions with the consultants and it was agreed the best place for dad was at home.  Systems were quickly put in place for dad to be discharged.

Miraculously and from nowhere, dad got his mojo back and at the day after he was discharged decided to go back to work – his second home.  Of course, this is where he needed to be.  Dad, a social butterfly now immediately surrounded by well-wishers, friends and colleagues, a huge swell of love, tangible around him and us.  The song we had repeatedly played in hospital for dad at his request, frequently crossing my mind, ‘One day at a time sweet Jesus‘, which is now a mantra on bad days.  Dad keeps getting up in the morning, like Groundhog Day, determined to ensure there is as much life left in his days as possible and to ‘prove the doctors wrong’.  We are grateful for every moment we have been given, every day is a blessing.  So for now, we celebrate every tiny victory and with dad’s sheer determination, we hope there will be many more.  Dad, you are a legend and we are so proud of you.

Amidst the endless journeys to hospital to see dad, I have been negotiating my ongoing treatment.  I am not sure I have had time to think about what has happened by way of my own diagnosis and surgery if I am honest, it’s all a but of a blur mashed into life’s adventure.  Where do I begin…I’m sure there’s a song there somewhere!

A few weeks after I started taking Tamoxifen, I started to lose significant amounts of hair.  I was in the shower one morning, Mark had taken the children to school early so I was on my own.  I noticed as a I applied the shampoo, clumps of hair were coming out, not the odd strand as normal.  I tried to wash my hair double quick but despite my best efforts, the hair loss was phenomenal.  I wept, totally distraught.  I knew this could be a side effect, in fact I had bought I Biotin shampoo to help strengthen my hair but nothing prepared me for this.  Over the next two weeks, I dreaded washing my hair and finally made an appointment to see my GP.  She referred me to our community pharmacist, Debbie – a marvellous, open minded practitioner who combines conventional medicine with natural alternatives.

She suggested I immediately stop using the Biotin shampoo saying any change at this stage in combination with the Tamoxifen is a change too many and recommended I go back to using my ordinary shampoo and conditioner which I did immediately.  She examined me and looked at where the hair loss originated from.  For me, it was either side of my temples, where it had been when I was pregnant, and a general ‘pony tail thinning’ as she called it.  Debbie felt this was due to a hormone imbalance and possibly due to low iron levels too.

She suggested (not prescribed) three items which I went on to buy: 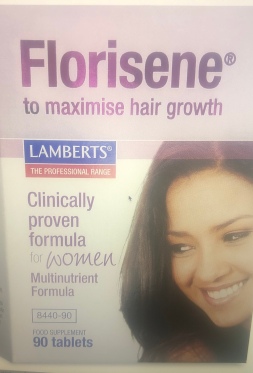 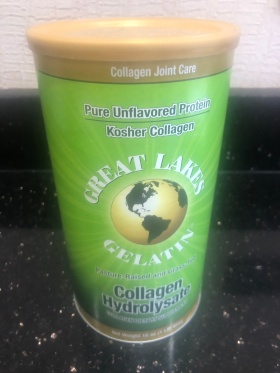 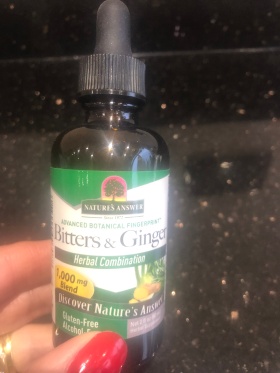 Debbie also advised me about the amount of oestrogen in water and the food we eat.  Of course if you are taking Tamoxifen and undergoing further radical surgery to prevent oestrogen production, you may want to think more carefully about what you are eating/drinking and where it comes from.  Of course, you may not give one about whether you are drinking oestrogen by the bucket load – don’t shoot the messenger!

I started to take my new combination of medication.  The Florisene was most tricky as it cannot be taken at the same time as other meds or before food but I managed it.  The Collagen Hydrolysate is fine in a hot drink and after three or four drinks, you can’t really taste the difference.  I am on my second tub now.  My least favourite and palatable, is the Bitters and Ginger, it does work though is truly horrid!

After three weeks, I started to see  new growth around my temples and it is now about 2cm long in places.  My hair is considerably thinner than it was though only my hairdresser and I notice.  The hair loss has stopped and for that I am truly grateful and of course the fact I was blessed not needing chemotherapy and the devastating effects of losing all your hair.   So, thank you Debbie for your advice, it came at the perfect time.

The uplifting moment of being given a nipple!

For those of you who may have a mastectomy or breast reconstruction, the days of having a nipple may be long gone.  When I woke up from my surgery, I was initially so delighted to find I had a bionic boob, I couldn’t care less about a nipple.  As the weeks went on and I physically started to recover, there were times when I was wearing particular clothes when it was obvious (to me), that I was ‘nipple-less’.  With my nipple reconstruction now a distant prospect due the damage of the radiotherapy, I was delighted when my plastic surgeon referred me to the prosthetics department.

Having no idea what to expect, we were greeted by two staff (who shall, remain nameless as they shamelessly broke all the rules and let us take numerous photographs so I could share them with you!), we will call them Ada and Rose.

We sat in a small waiting area, a little bit like a dentist.  Once again, I had to undress – I am so used to getting my boobs out these days, I am quite blasé about it now.  To be honest, they have been seen by so many people, they don’t even feel like they belong to or are part of me anymore, rather something I have been given for safekeeping.

Rose would be overseeing my prosthetics and promptly set about mixing colours.  It was totally fascinating and I could not believe all this effort was being put into my nipple production.  If this goes into a nipple, God knows, how much effort goes into making a leg!

Next up, my left nipple was ‘cast’ in a green plaster mould and from this the colours would be used, layer upon layer to build a realistic nipple prosthesis for me.  When the prosthesis was ready three weeks later, Rose wasn’t happy with the colour and re-mixed the colours for a better match.  It is a very sophisticated process.

All of this provided much light relief at a time we were otherwise feeling at the depths of despair.  When I went to collect my nipples (I know it sounds ridiculous!), I cried.  I don’t think I realised the psychological impact of not having one and suddenly I had a choice – what a blessing.  So now, every morning, I don my make up, sweep my hair up into a bun and before I get dressed, stick my nipple on.   How lucky am I!!

The joys of a gastroscopy and a colonoscopy (on the same day – what a bummer!)

Since 2016, I have been having problems with recurring oesophageal candidiasis and seriously upset tummy which have led to a number of tests already.  Before my mastectomy, it flared up and my GP suggested it was time for another visit to the gastroenterologist but was happy for me to wait until after I recovered from my breast surgery.  The inference, to rule out inflammatory bowel disease; Crohns  and Colitis

I discussed with the gastroenterologist the prospect of having a colonoscopy given my recent scar tissue and surgical mesh holding my abdomen in place but she was certain that given the ‘superficial nature of the scar’ it would be a pain free procedure.  I was less than convinced, so much so, I phoned her secretary later in the day and asked her to speak to my plastic surgeon.  I received a call back to say everything would be fine.

Two days of trill, four litres of ghastly laxatives and several loo rolls later, I arrived -ready!  I was greeted by a doctor who I prayed was not going to be my doctor – tall, dark, swarthy, reminisce of George minus Amal.  He left me yet another theatre gown and a pair of Bermuda shorts with secret access at back akin to something you’d find in Ann Summers but far, far less flattering and certainly not in my size.  You can imagine my surprise when the knock on the door came signalling it was time to go and there, as I opened it, stood in my Bermuda shorts, backdraft rattling through my behind, was my George Clooney lookalike.  I was so pleased I’d done my make-up though why I was bothered – he certainly wasn’t looking at my face!

Joking aside, the gastroscopy was seamless.  The colonoscopy was excruciating and had to be stopped before it could be completed.  George – the consultant – said it was too soon for this type of procedure to be carried out given the extent of the surgery performed.  So my advice to you my friends, if you have had abdominal surgery, especially if it is recent, do question your consultant and make sure this procedure if the right one for you.

What is next on my amazing journey to health

There have been quite a few twists and turns during the last eight months and as we knock on the door of 2019, I know there may be more to come.  The dreaded colonoscopy has been re-booked but performed differently so I should feel nothing; returning to work, albeit briefly before my hysterectomy when I will be thrown into surgical menopause, longing for HRT and making do with extra helpings of isoflavones in every meal – may the force be with everyone around me and can I take this opportunity to apologise now if I become demonised or an emotional wreck; the possibility of nipple reconstruction in the spring and the decision I am still waiting for – whether I need a left mastectomy.

Most importantly of course is my ever-loving family and friends who have been and continue to be tremendous – this whole adventure would have been so much more difficult without you; and of course Dad, stay well and stay positive – we’re not just behind you 100%, we’re thinking of you all the time, sending you positive energy and praying for you.  It’s not over till the fat lady sings, and she’s not singing!  I love you xx

Thank you for sharing my story so far.

Happy New Year, I hope it is peaceful, prosperous and healthy and if it isn’t, I hope you find strength to muddle your way through.